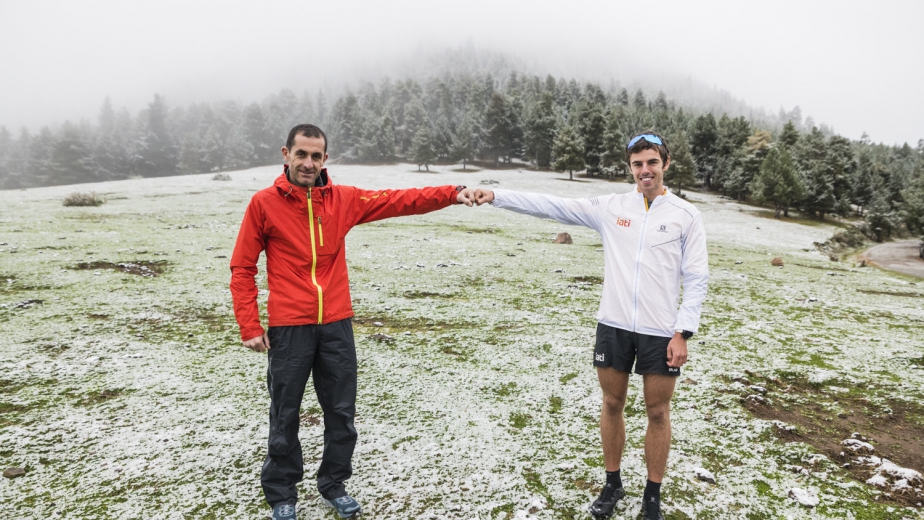 The two teams have met in Bagà to complete by relays the 94 km and 6,200 m + of the Ultra Pirineu divided into five sections. Running the route in a friendly team duel was the excuse to share, return to the mountains, the Porxada square, the magic of the route and the #timetoplay.

Smiles and "elbows" as a greeting instead of the coveted hugs. This is how all the members of the two teams greeted each other on Friday afternoon when they arrived in Bagà. Iker Karrera, Nerea Martínez, Mònica Aguilera, Aurelio Olivar and Agustí Roc on one side and Aritz Egea, Ainhoa Sanz, Eli Gordón, Jan Margarit and Tòfol Castanyer on the other. And in the distance, Miguel Heras and Cristofer Clemente, who were unable to attend the meeting. A mixture of experience, experience and youth, but above all, a lot of enthusiasm. "I am very excited and happy to be here and meet again with everyone, in the first edition of 2009 I ran with Nerea and Monica and I have very good memories", says the veteran Aurelio Olivar, who finished fifth in 2009.

"When we met again this afternoon the first memory that came to mind was the same for both of us", explained Castanyer. "At the 2014 UTMB, after battling each other over the 170 km route, when we reached the finish line we merged into a hug that I will never forget", recalled Karrera.

After chatting, joking, remembering and telling little battles, the members of both teams divided up the sections of the route and outlined the strategy to follow to bring the 94 km to life in one year and such an atypical edition. Later they would share their sensations in the live broadcast on social networks, with a surprise visit from the runner Laura Orgué, which can be retrieved here. There was also time to review old photographs or exchange shoes, backpacks and equipment from other years.

This first meeting was just a small prelude to the sea of emotions that would be present throughout the day on Saturday.

Five sections, side by side

Cold, wind and even at night. In this weather, at 7 am, Agustí Roc and Jan Margarit started this special edition from the famous Porxada square in Bagà, with the traditional starting arch and the classic soundtrack of The Last Mohican. This year without being crowded with runners and without the heat of the public but equally emotional, full of nerves and faces of illusion. The two runners are 26 years apart but are joined by the same ear-to-ear smile and eyes full of excitement, like two little children.

Side by side and following the same rhythm they have passed together through the Rebost shelter accompanied by the full moon and the spectacular views of the Pedraforca summit tinted red by the first lights of the sun and shyly white by the snow fallen during the night. After 1h55' and covering 14 km and 2.000 m + they have arrived at the Niu de l'Àliga refuge, covered with snow in a landscape atypical for the season, to give the relay to the next couple, Mònica Aguilera, third in the first edition of the race (2009), and Eli Gordón. The first female couple arrived in Collet de Font Freda with a time of 2h12' after 17 km and 640 m +.

There it was the turn of the Basques Iker Karrera, third in 2010, and Aritz Egea, facing one of the most demanding sections with 25 km and 1,300 m + to Gòsol, through the emblematic Pas de Gosolans, now covered with fog and a thin layer of snow. After running for 3h10' they have reached Gòsol on par.

The fourth section was in the hands of Tòfol Castanyer and Aurelio Olivar, who have covered the section from Gòsol to Vents del Cadí, with 21 km and 900 m +.  "It has been very nice to run with Aurelio, it was the first time we did it together and it has been a pleasure, we are the old glories", said Castanyer at the end embracing Olivar. "I loved it, it was wonderful", said Olivar at the end, after completing it with Castanyer in 2h34'.

Finally, the last girls' relay, with Nerea Martínez, winner of the 2010 edition and second in 2009 and 2011, and Ainhoa Sanz, winner of last year's Sky Pirineu, who have been in charge of covering the stretch from Vents del Cadí to Bagà, passing through the mythical stretch of Els Empedrats, with more water than ever, on their way up to the Sant Jordi refuge. They have also been joined by Diego, whose first ultra was the Ultra Pirineu last year, and Abel, the two popular runners who won the draw made during the previous week on social networks. "My dream is to share some kilometers with Tòfol", commented one of them the night before. "Dream come true", said Castanyer with a smile. So Castanyer also joined them in the final stretch. In total 14 km and 900 m + that have finished with a time of 2h07' and the reception of all the companions to conclude a day for the memory.

In total about 94 km and 6,200 m + approximately the same goal: to reach Bagà sharing, playing and smiling.

A meeting that will be hard to forget and that everyone could follow from home through the social networks of Salomon Spain and Salomon Ultra Pirineu.