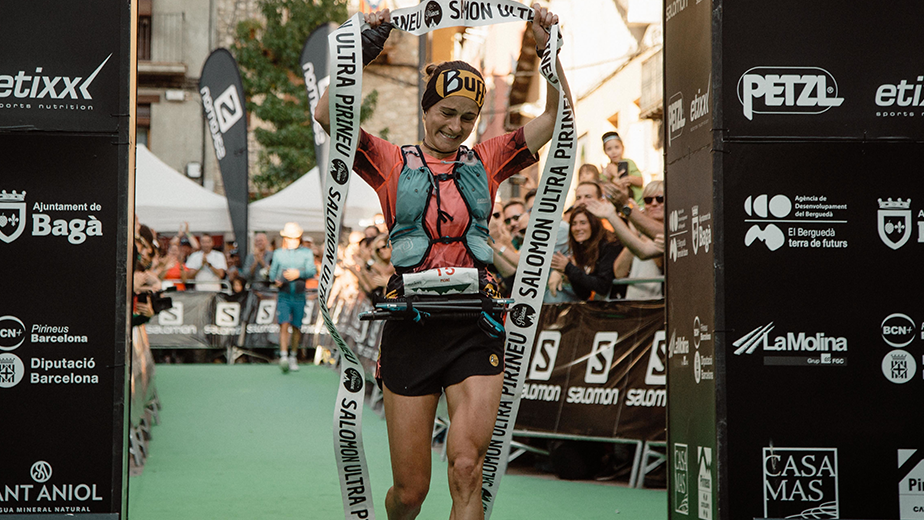 Despite its five races with almost 4,000 athletes, the Salomon Ultra Pirineu would be nothing without its queen test, the demanding long distance race that gives its name to the event. And the race would be nothing without the runners who year after year return to Bagà to face this major challenge. Athletes as the winner of this year, the Russian Dmitry Mityaev, who has already run in 4 editions and that in 2019, finally, has managed to get on the top of the podium. Many editions in the legs also carry the second and third classified, the Peruvian Remigio Huamán and the local runner Ivan Camps who have been ascending positions until being crowned in this 2019 on the podium.

In its eleventh edition, the Ultra Pirineu has reduced its distance by returning to part of the original route (94km, 6,200m) but the change in distance has not modified the large squad of athletes who have taken the start. At 5:30 the 1,000 front corridors were lit in Bagà to embark on the great adventure touring the Natural Park of Cadí Moixeró. The bejarano Miguel Heras has dominated in the first part of a tour that he knows as the palm of his hand after numerous participations and three victories in 2010, 2011 and 2016. Very close were followed by other old acquaintances of the test: the Russian Dmitri Mityaev, second in 2016, Peruvian Remigio Huamán (three participations) and local runner Ivan Camps, who ran at home for the sixth time.

The head positions were exchanged but Miguel Heras remained strong until the shelter of Lluís Estaen (km 66), when he has slowed down due to a severe leg pain that has led him to leave. That low point has been taken advantage of by its competitors and Mityaev has passed it, making clear its intentions to bet on the victory in Bagà. The Russian has advanced concentrated in the last part of the route, where he has imposed a strong and constant rhythm and no competitor has managed to reach him. Thus, Mityaev fulfilled his dream and entered Bagà with a smile from ear to ear with a time of 10h22’55 '. At his side, his wife Ekaterina Mityaeva was waiting for him, who won the same test last year and who has assisted him this year. Upon arrival, the Russian commented: “The Ultra Pirineu is my second home. We come here year after year because we love the race, its route, the public that encourages us ... For me it is a dream to be able to return, and even more for having achieved victory. It has been a very hard and very disputed race, at the beginning it has cost me but from the middle I have started to feel well and I am very happy. I hope I can keep coming back for many years. ”

After twelve minutes the Peruvian Remigio Huamán arrived (10h34’58), also very satisfied and grateful. The podium has been completed by the young Ivan Camps, who with 25 years has already taken six participations in this race, where his progression has only improved to get on the podium with a time of 10h43'26 '': “Six years ago I come to this race, it is my home and I am very happy to have achieved the third position. It came with the idea of ​​making a podium and in the end who follows it gets it, ”said Camps.

In the women's category, Mònica Comas (12h31’10 ’) arrived in Bagà to measure for the first time with this test; I had never disputed such a long test. A very quick exit has pushed her towards the first position and was leading Niu (km 14) and commented: “I did not expect it at all, I have arrived at Niu d'Àliga a little faster than I expected and thought that sooner or later I would pay it, I was very convinced that the second one would reach me, ”Comas explained. It has not been that way, since no one has been able to shade it and has been advancing and maintaining distance with the second. Mònica Comas arrived visibly excited to Bagà where she explained that “It has been a very nice experience, going through the shelters and finding all the people cheering you up gives you wings to continue, although it has been very hard I am left with very good feelings”.

The second position has also not changed throughout the race, and the athlete of the international Salomon Team Mimmi Kotka (13h15'59 '') has been placed in the second position that she has maintained in almost the entire route and explained: “It is my first time in the Pyrenees and I loved it. It is a beautiful race with a great atmosphere, but with a technical and very hard course. It cost me a lot and I doubted in the end, but I thought it was so beautiful that I had to finish it. ” In the end, he has come almost side by side with the third, the Catalan Montse Martínez (13h18'16 ''), who has made a great career and has sneaked into the third step of the podium and one of the best results of his career sporty.

The appointment will lower the curtain tomorrow Sunday at 7:30 a.m. with the arrival of the last participants. Most of them remain in the race with the dream of reaching the goal located in Bagà and being finishers of this eleventh edition